In 2021, we welcomed a brand new team of BFA Junior Captains: 15 middle school and junior-high aged girls in baseball committed to growing the game in their own communities. This team represented 10 states and six Baseball For All teams, including the Boston Slammers, Chicago Scouts, DC Force, East Bay Oaks, Florida Bolts, Los Angeles Monarchs, and the New York Wonders.

“[I made a video] that focused on topics that aren’t often discussed within the girls baseball community. I realized that I was insecure about topics in baseball that had to do with being a girl, and I never talked about them with anyone.  One of the questions I asked [the people I interviewed] was about playing baseball while on your period because I realized it’s something I’ve never spoken about that with anyone…and I wanted to talk about it and see how other [girls and women in baseball] have handled it before.

“My project this year was talking to Girl Scout troops…[and putting on a clinic]. I reached out to over 30 troops, and we chose a night to get together. There were girls ages 7–9…and I interacted with the girls and got them really excited about baseball. They asked about baseball and if I had ever been bullied or if I’d ever played against another girl. It was awesome sharing my experiences and telling them about girls’ baseball. I chose Girl Scouts because I wanted to reach an all-girls audience. I knew Girl Scouts would provide that, and they are looking for opportunities to empower girls and build confidence. I want to let girls know that they can do anything, including male-dominant sports.”

“My project was a video about BFA. I was inspired to create this video after taking a class in 7th grade called Digital Media. I wanted to tap into the internet and reach out to others online; this is how I learned about BFA, so I wanted to create something that would be on the internet, too. I hope that when girls watch this video, they’ll be reminded that there are other girls out there playing baseball and they’ll be reassured that they can be confident in playing. I also want to encourage parents to support their daughters in baseball by encouraging them to keep playing, being coaches on their teams if they can, and help their daughters move forward in a world that’s still dominated by boys.”

“My plan is to reach out to the the Miami Marlins, Palm Beach Cardinals, St. Lucie Mets, and more. My main goal and the whole reason I chose to do this was simply to grow the game for women and girls in baseball as much as I personally can. I would mainly aim for 8, 9, and 10-year olds to participate because that age I find from personal experience is when a lot of girls feel almost pressured to switch to softball, and I feel if they had this kind of experience knowing that they had all this support would motivate them to keep playing baseball.”

“I organized a home run derby, just for fun. I did this project to give girls an opportunity to play baseball…and expose more girls to play. This is important because us girls get underestimated really easily and we need to prove to people that we can do anything, just as much as boys can do.” 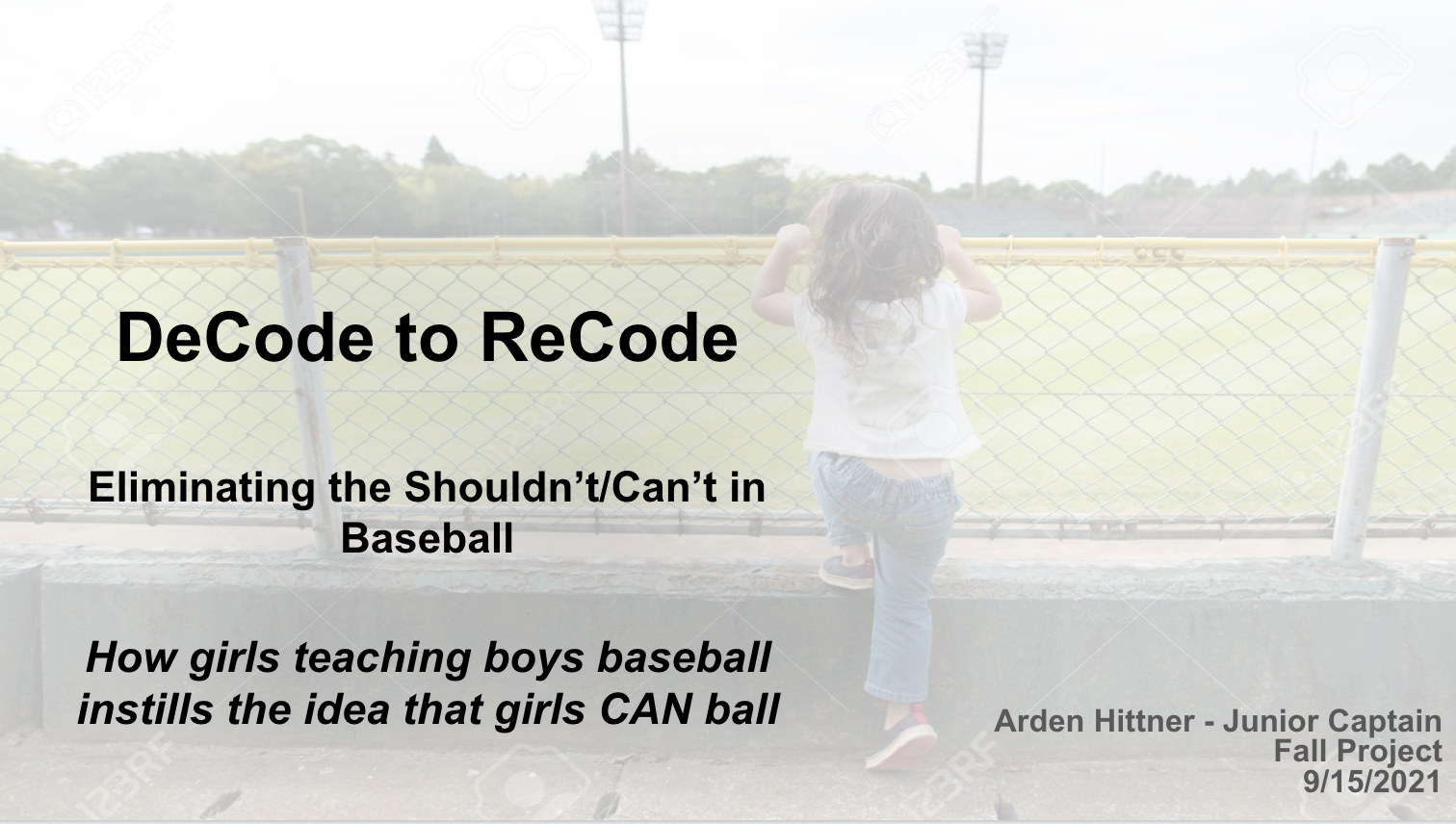 “At some point around the ages of 10–12, a good percentage of boys adopt an attitude that girls can’t/shouldn’t play baseball. This always made me wonder. How did this happen? Are these boys being told by someone or just making it up in their heads and it feels to each other like some sort of science fiction idea?

“[Part of my solution is to host] a one-day baseball skills clinic for 10–12 year old boys, taught exclusively by girls. I am hoping that by showing representation for one day, I can change one boy’s attitude at the age where it can change. If I can do that, it is worth it.”

“I chose warm-ups that girls can do before games to get ready to play baseball. [Warm-ups] make you mentally and physically prepared for baseball. I filmed examples of myself doing the different stretches, and gave descriptions for each.” 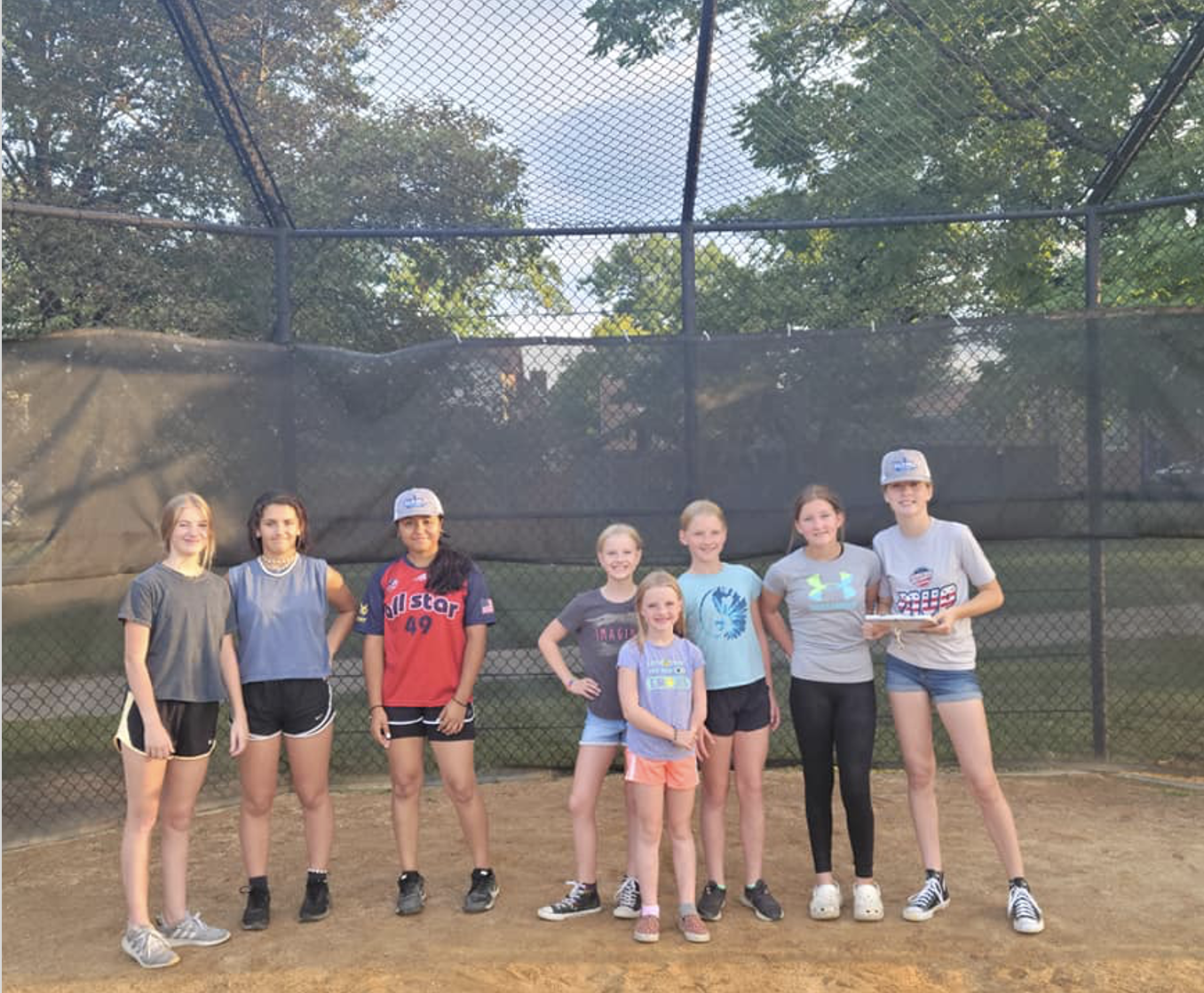 “My project was a competition/clinic. There was a throwing competition and running competition. After my competition, we all watched the movie, A League Of Their Own. I hope my clinic inspired some of the girls to start thinking about baseball and considering it, and for the little girls, I hope that instead of choosing softball right away they will tryout baseball.”

“I started a YouTube channel where I did ‘box break videos’ and called it ‘Breaking Boxes Like a Girl.’ I do a lot of box breaks with my family and watch a lot of them on YouTube, but I don’t see a lot of girls or women in them, and that gave me the idea to start a channel. I hope this shows girls that you can do anything, and that they’re not the only girl out there who likes baseball.” 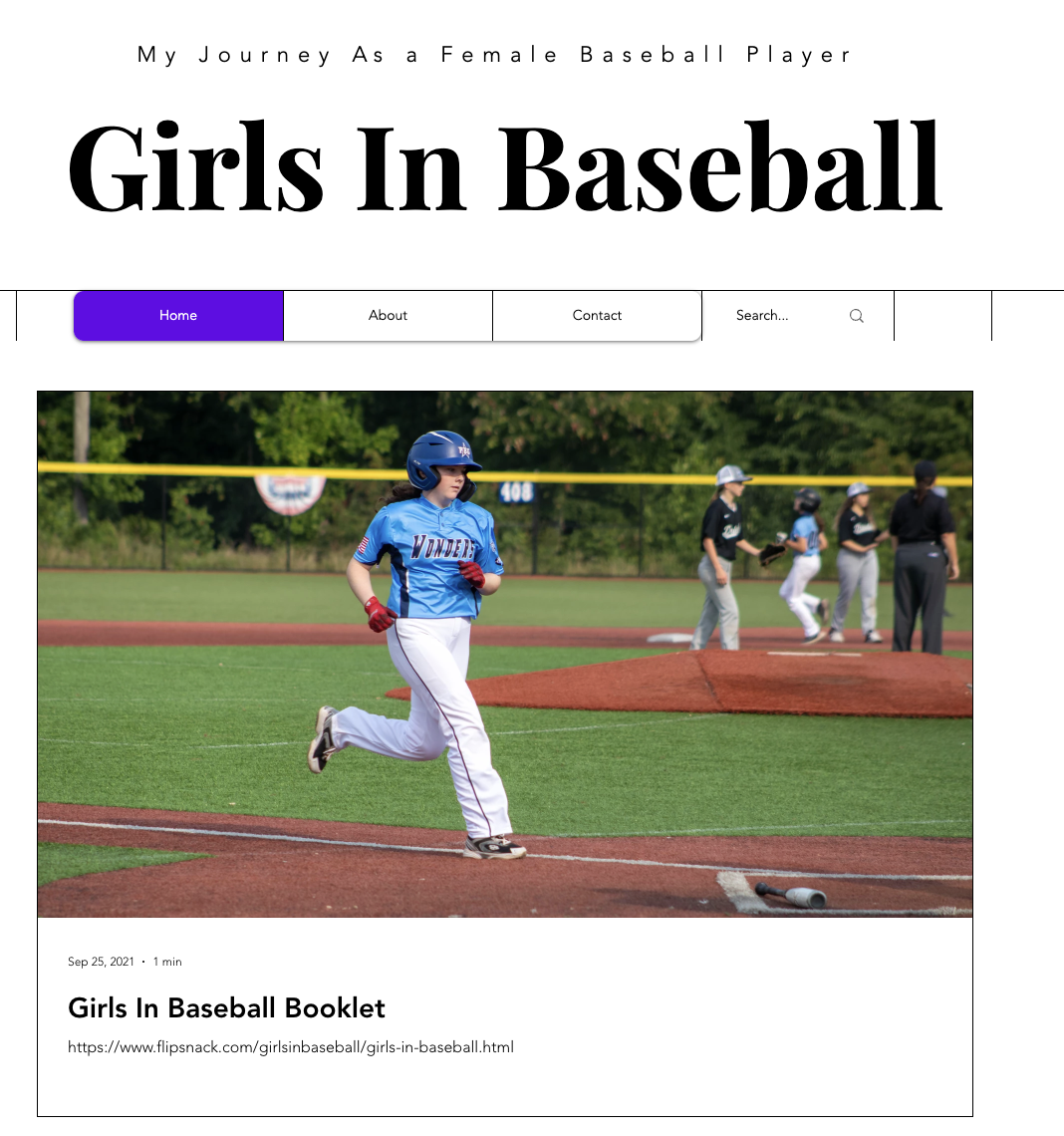 “For my BFA Junior Captains project, I made a website. [I built on my project last year], and created a blog where I talk about what happens in my life as a female baseball player, my future goals in baseball to play on the USA Baseball Women’s National Team and  to work for the MLB, and my dreams to play in college baseball.

“I wanted to create a place where girls can see that they’re not alone. I want them to be able to reach out and talk about their story while also getting inspiration from my story.”

“My project is going to be hitting clinics for girls 6–8 who do not have a lot of experience in baseball. During these clinics, I will have different drills and stations set up for the girls to work on themselves or with help by me or another girl helping me run the clinic. I also have been in contact with my local Little League manager to ensure he is continuing to view girls as any other players and make sure they feel included in the game.” 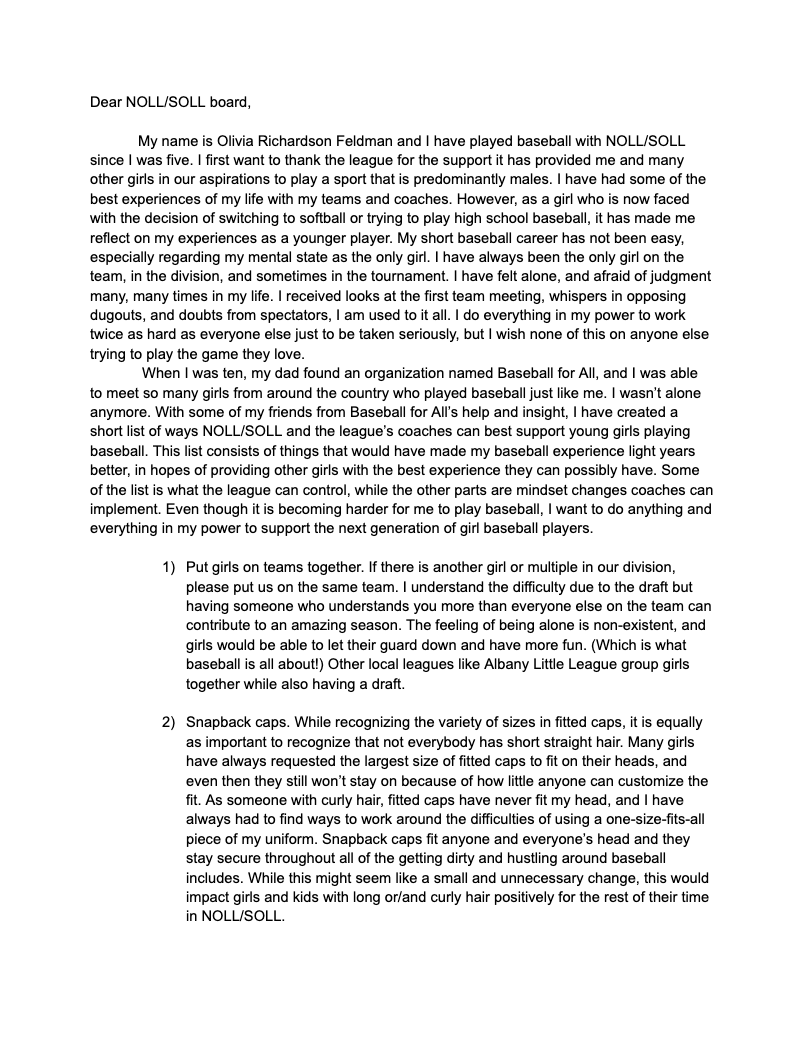 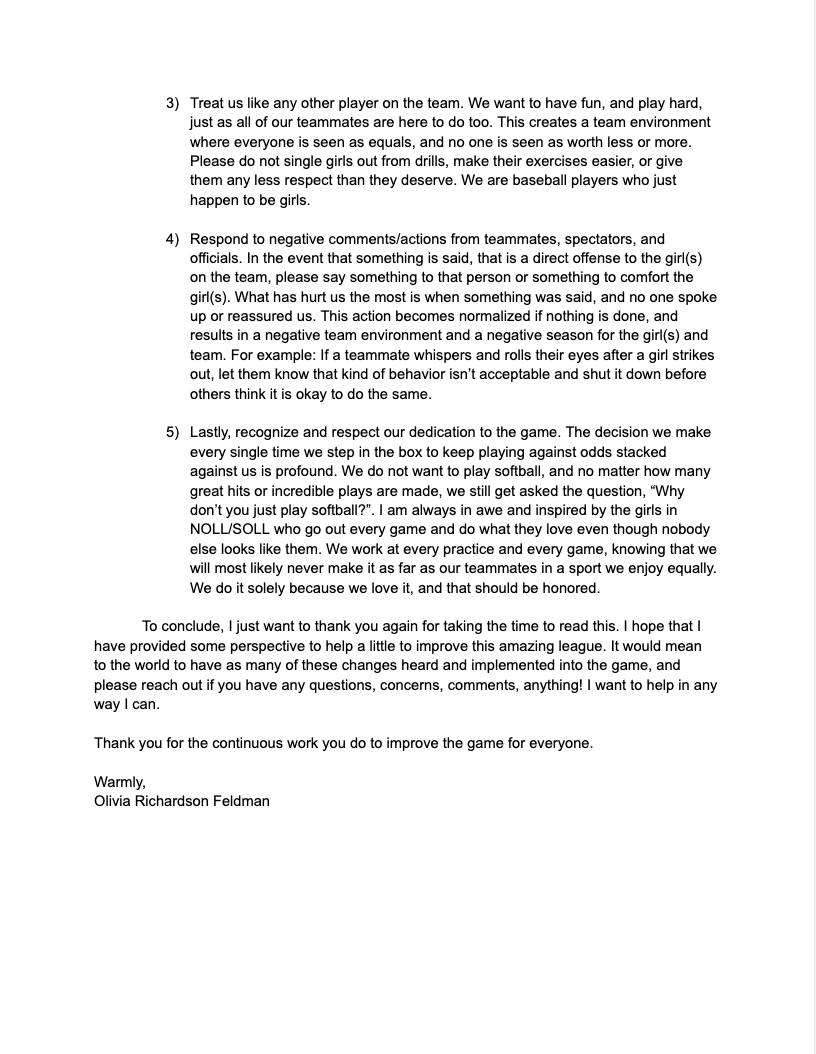 “My project was writing a letter to the board of my local Little League on ways they can best support girls who play. I collected many different perspectives of girls who play baseball on what would have made their experience better, and reduced it to a short list. The impact I hope this will have is for girls in my Little League and in my county to be able to love baseball as freely as they please. I hope they never have to worry about judgment, how they can wear their hair, or how hard they have to work. I want girls all over to know that they are just as much of baseball players as any boy they ever see; and no one can tell them otherwise.” 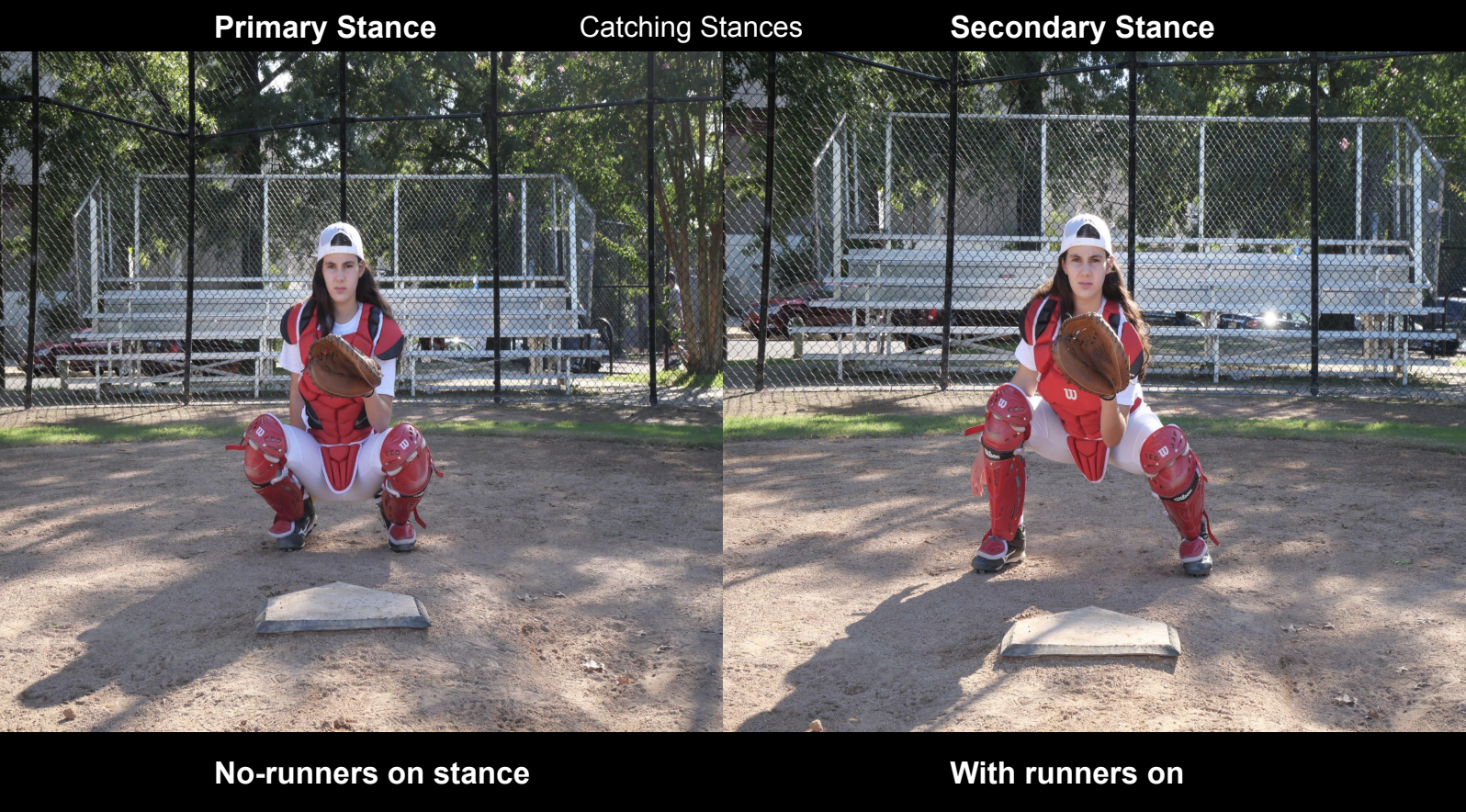 “I wanted to make playing baseball easier for girls who want to. I realized there are a bunch of drills out there with men doing them, but have you seen many of girls? I don’t think so.

“I decided to take pictures of me doing step-by-step drills—the same that men do—centered around catching, and some pitching. I know that when I was learning baseball, it would’ve been better for me to see women doing drills instead of men, just for the connection. My hope is that girls (and boys) will follow these drills and send them to their friends, and that a girl seeing another girl catching will inspire them to keep on trying.”

“I’m going to do a clinic on October 10 for 20-30 girls. I did something similar in 2019, too. I hope that this helps grow the game for younger generations of girls coming up in the sport…and I want to show people what I can do as an individual and that I have a spot in this game and I can do anything that I want.”